Miłka and Marek recently turned forty. They are friends and support each other since their studies. When Marek is left alone after a traumatic divorce, Miłka goes to great lengths to find him a new partner. Traditional methods fail, so he enters the world of dating sites, so far unknown to the happy wife and mother. But won't portals turn out to be Pandora's box? And is the friendship between Miłka and Marek really as pure and strong as they think? Because can a man and a woman really be friends - without any subtext?
You can buy this book as part of the "second book -50%" promotion at Świat Książki. 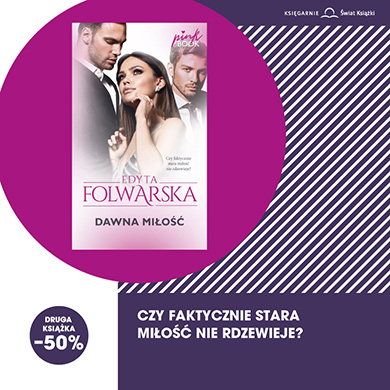 Aga is a modest saleswoman in one of the popular clothing chains. She has a handsome fiancé with whom she is in love head over heels, and two friends - Monika and Anka. Her life - apart from those extra five kilos - is almost perfect. Almost, because suddenly the fiancé proposes a break, and the friend disappears. Aga meets handsome Miłosz in the pub, then she runs into her ex-boyfriend, and then ...
Exactly ... Does old love really not die?
"Dawna miłość" takes part in the promotion "second book -50%". 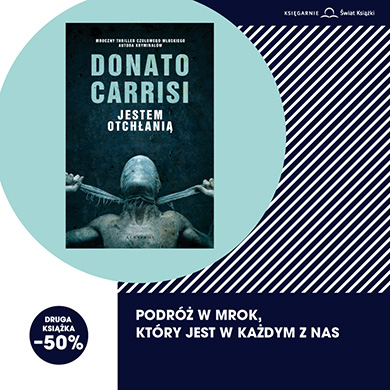 He lives according to a fixed rhythm, because only in this way can he remain invisible, be a shadow on the fringes of the world. Only on rare but memorable evenings he allows himself to deviate from his habits.
Everything changes when, at the sight of a drowning girl, she cannot resist an impulse and saves her life, and thus runs the risk of losing her invisibility and the anger of the man hiding behind the green door.
You can buy "Jestem otchłanią" at Świat Książki. This title is available in the "second book -50%" promotion.

Oswald Bousko, deputy commander of the Schutzpolizei, who turns away from fascism, and Rebeka Steinert-Aspis, a Pole of Jewish origin, widow with two children.

During the first deportation from the ghetto in June 1942, Bousko, by working miracles, tries to save Rebecca and her children. His friend, an SS officer, stands in his way, trying to thwart his plans at all costs.

The love between Oswald and Rebecca is impossible, forbidden ... But on the other hand, is there anything more powerful?

More titles in the beautiful, exclusive edition of the classics. William Makepeace "Targowisko próżności" and Pierre Choderlos de Laclos' "Niebezpieczne związki" with covers, upholstered in a delicate, smooth fabric with silk properties.
You can buy both books in the "second book -50%" promotion at Świat Książki.

You take two and pay only half the price for one. It is a permanent promotion at Świat Książki. In it you will find novelties and bestsellers from almost every kind of literature!

"CZYTAM najTANIEJ", is a permanent promotion in which you can buy books with prices reduced by at least 40%. You have to admit, it's really cheap reading :)