Fairy tales from our childhood require a remake! Laura Lane and Ellen Haun made it. A witty, razor-sharp interpretation of the most famous stories shows Disney where it belongs.
Cause you know what? Kissing an unconscious woman should never happen. And guess what else? The way out of poverty is not to marry a rich prince. NOR wearing delicate shoes. After all, why is a woman living with seven guys expected to cook, clean and wash?
You will find the bookstore next to the food court. You can get it in the "second book -50%" promotion.

More than 75 years after the liberation of the Auschwitz camp, it turns out that behind its barbed wire, in one of the SS blocks, a woman lives, who to this day is a "prisoner" of this place and its history.

It is an extraordinary story about family tragedies and the perversity of fate, which lovingly connected a prisoner of the camps at Majdanek, Ravensbrück and Buchenwald with a prisoner of Auschwitz, sending them to Birkenau after the war.
It's easy to find your way to the bookstore - near the food court. The latest book by Nina Majewska-Brown takes part in the promotion "second book -50%". 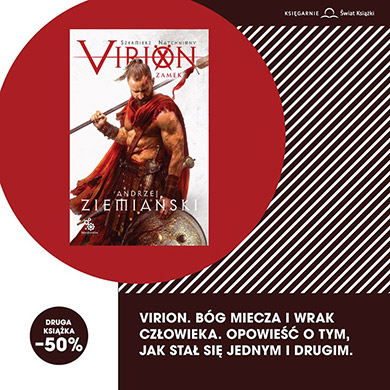 How did Virion become the Inspired Swordsman? You will find out in the book „Virion. Zamek” by Andrzej Ziemiański. The book takes part in the promotion "second book -50%" at the Świat Książki bookshop.

Running away from the imperial axe doesn't mean the end of trouble. The madness reaches its apogee and Tadia and Virion stand shoulder to shoulder to fight a common enemy.

A star with a tail rolls across the sky.

The world is ending. The time of all-consuming evil, untamed chaos and utter destruction is coming.
You will find the bookstore next to the food court.

Nicholas Sparks returns in a beautiful style and immediately falls into the promotion of "second book -50%" in the Świat Książki bookshop.
A doctor who is hiding from the world and two women whose secrets will change his life ...
The relentless will to know the truth will allow Trevor to understand the true meaning of love and forgiveness. And it will give him an important lesson - that in life, in order to move forward, we often have to go back to where it all began.
You will find the bookstore next to the food court.

In Świat Książki bookshop, which you will find next to the food court, you will find the "second book -50%" promotion. The promotion covers novelties and bestsellers from almost every type of literature, for example:
Books by Nina Majewska-Brown,
Nicholas Sparks books,
Books from „Historyczne bitwy” series,
Books about Virion.